Over the Christmas break, my oldest was home from college and the whole family was back together again.  For many years when the kids were younger, we strived to have dinner together almost every night.  But now that there are older, one is away to college, one has a job and another has frequent basketball practice, so dinner with all six of us is fairly uncommon.  That is until holidays roll around.

The dynamic, energy and overall excitement around the table definitely amps up.  Although my wife and I struggle to understand the various meme references or quotes from YouTube ‘stars’ we’ve never heard of.

Quick side (or indented) note – up until 18 months ago, I had never heard of the word “meme” but my kids use it all of the time. Curious, I looked up meme’s origin and found it was coined by an evolutionary biologist, Richard Dawkins, in 1976 to describe how ideas replicate similar to an organism [reference: http://mentalfloss.com/article/61843/what-origin-word-meme].  So it’s been around a long time, and ironically its growth in use is actually the perfect example of what a meme is!

Now, back to the action.  Post evening meal, my kids all retired to the basement to play some multi-person video games from their recent Christmas haul.

There had been a time when I did Dance Dance Revolution with them (sorry I just created that mental picture for you) but my overall skills in video games in general have dramatically dropped off since playing the original Tomb Raider PC games years ago.  Undaunted I joined them in the basement and asked to play.  Turns out playing Super Mario 3D World was not so much fun for me.  Not only did I have no idea what I was doing, but I frequently lost track of my character and more often than not I either fell off, jumped off, or was picked up and thrown off a ledge.

I was frustrated, didn’t know what I was doing, felt stupid because I wasn’t catching on and if I’m being honest, I was feeling left out from the fun everyone else was clearly enjoying.

Things changed when I asked if maybe there was a game that required cooperation to get tasks done versus all out competition.  And frankly, I needed someone to take the time and teach me.

Enter the game Donkey Kong Tropical Freeze and lessons from my youngest son.  Turns out I died just as often as I did before, maybe even more often, but it was an entirely different experience now. I learned each time what did and did not work in the game, especially as my son taught me when to shake the nunchuck, how to jump and climb the vines and most important, how to time my jumps.  Each new experience was just at the edge of my ability and sometimes I succeeded and other times I didn’t but I always learned and progressed forward.  Now I was having fun and the time was screaming by.

So what does Donkey Kong have to do with loving the job you have?  Turns out there are key neuroscience lessons from this experience that can be leveraged in the world outside of video games.

My experience with video games is not unique and has been studied extensively.

Neurologist Judy Willis has shown that playing progressively challenging video games increases the dopamine levels in our brains – basically we get a shot of this reward hormone over and over again.  Furthermore, Neuroscientist and researcher Jane McGonigal in her book Superbetter explains how ‘prediction’ is the foundation for this dopamine cascade:

“Making a prediction is one of the most reliable and efficient ways to prime and stoke the reward circuitry of the brain. “Every prediction you make—no matter how trivial—increases the level of the dopamine in your brain,” says neuroscientist Dr. Judy Willis.

Dopamine, of course, is the “reward” neurochemical responsible for motivation, learning and desire. And every time you make a prediction, two rewarding outcomes are now possible. You might be right—which will feel good! Or, you might be wrong—which will give you information that will help you make a better prediction next time. Surprisingly, the possibility of being wrong also feels good—because your brain loves learning.”

That’s because every time you make a move, or fire a weapon, in a videogame, your brain treats it like a mini-prediction.”

How can you leverage the power of prediction at work?

It’s actually quite easy since a lot of our work experiences tend to tread fairly familiar ground each day supplying us all with ample opportunities to predict what our experiences will be like. We all have co-workers and someone usually talks about the weather or is late to a meeting or receives a package and so on.  We also have a daily commute, frequent meetings, ‘talks about empowerment’, lists of corporate buzzwords (the endless search for synergy and game changing opportunities), such that one can almost predict who might say what in various settings.  So the easiest way to leverage prediction is make a list of the different work related experiences you might have in a day and see how many you get correct.  Whether your predictions are positive or negative, you’ll get a jolt of dopamine each time.

Looking for something more fun than a simple list?  More to come after secret #2.

I’ve always wondered how musicians feel when their songs born from personal hardship end up being used in cheesy commercials.  Back in the 70s, Carly Simon wrote a heartfelt ballad about what the future held for her and her partner, and the importance of savoring the now.

That same song, Anticipation, became even more popular after being forever fused and associated with Heinz Ketchup.

Fast forward to now.  Researchers have extensively studied the effects of anticipation and what it does to our brains.  In one experiment, participants were asked to rate their feelings about future and past events [reference: http://psych.colorado.edu/~vanboven/VanBoven/Publications_files/vanbovenashworth2007.pdf].  It seems we consistently rate the anticipation or looking forward to an event higher and more intensely than past events we have actually experienced.  In fact, most of our pleasure comes from the anticipation versus the actual event itself.

Furthermore, different types of events impact the intensity of anticipation as well.  Ninety-seven participants were asked to rate an upcoming experiential or a material purchase (e.g., experiential could be going to a concert, out to dinner etc. versus material would be buying an item like a purse, clothing, and so on).  Their anticipation was rated on ‘excitement’ and ‘pleasantness’ scales [reference: http://journals.sagepub.com/doi/full/10.1177/0956797614546556].  They found that anticipating experiential events is more exciting and pleasant than material purchases.

Combining prediction and anticipation at work will increase your overall job satisfaction.  Each day, there should be at least one activity or event that you are positively anticipating – it could be a new assignment, completing a particular task, learning something new but it must be something specific to that day.  And doesn’t even have to be strictly work task related, it could be taking a coffee break, having lunch with or taking a walk with a friend, whatever.  It just needs to be something you know you will look forward to.  A lot of people make their next day’s to-do list at the end of the day.  If you are one of them, take a few moments to make sure you plan in an activity you will look forward to.

Ready Made “Prediction and Anticipation” Activity

I’ve given you a few ideas above, but for those of you looking for a ready-made activity that is simple, fun and leverages the science of both Prediction and Anticipation, here it is – Office Bingo!

I’ve borrowed this concept from a story shared in the book SuperBetter referenced earlier.  In the book, McGonigal describes a friend who knew he was going to be having a challenging job interview and to prepare, he created a bingo card of all of the different questions he predicted he might be asked.  The next day during the interview, each time he was asked a question that he predicted, he mentally checked it off and turned what could have been an uncomfortable situation into a dopamine charged game not to mention being better prepared for the interview.

Below are two “Office Bingo” cards. 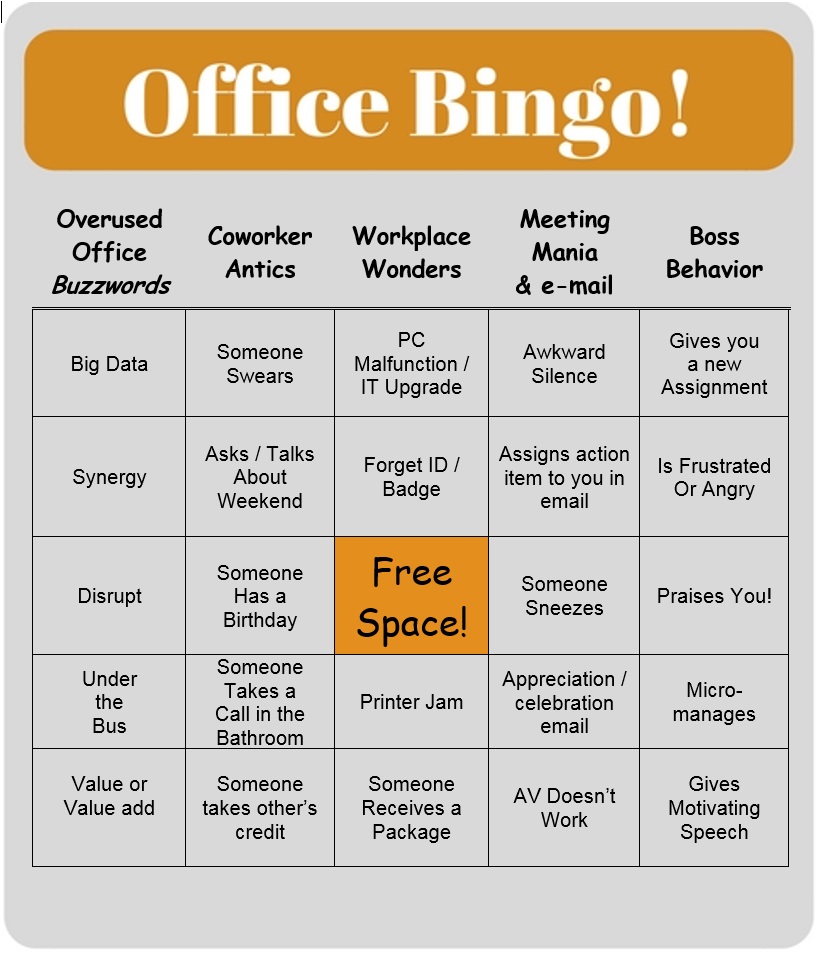 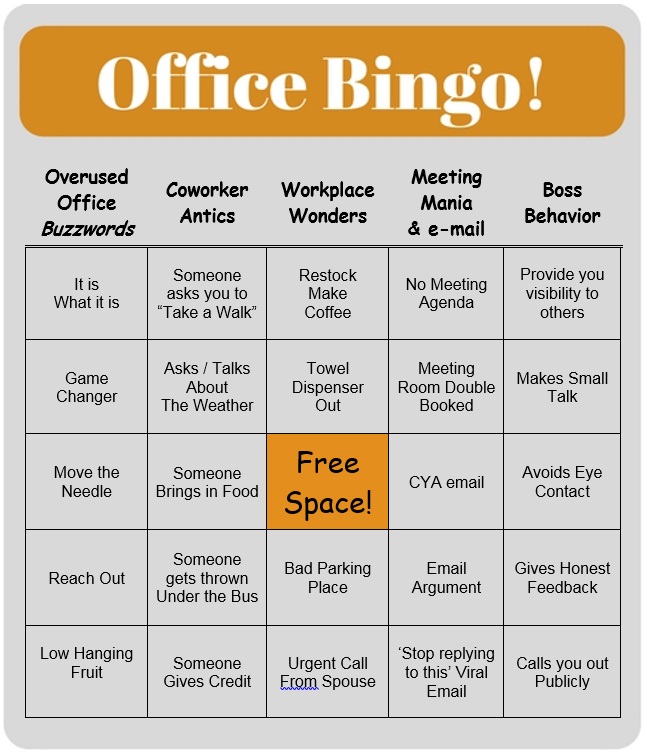 There are numerous ways to use the Office Bingo cards.  Some ideas to get you started are listed below.

The different options have varying degrees of anticipation and prediction built into them.  Experiment with these and other options you come up with on our own.

As you use these cards, you’ll soon find other non-Bingo ways to use Prediction and Anticipation and Love the Job You Have!

Want to know if it is ever a good idea to Fake It?  Check out this post !