During the holiday break, my kids were home from school and our family dog, used to being mostly alone during the day, was now in the company of all of us for more than a week and his tail was wagging like crazy wondering who of the six of us would play with him or take him for a “W”.

Quick side note: I can’t say the word ‘walk’ otherwise the dog will hear and immediately run to the door and whimper ready to go out and see the sites of the neighborhood. Once that switch is turned on there is no turning it off. So please, when you come over, make sure and use the code letter “W” when referring to this activity.

While you would think with so many of us in the house, there would be plenty of attention to go around. However, for that day after gift opening, there were many other distractions – laptops, new video games, tablets, etc. and the dog, well, he wasn’t getting quite the attention I think he thought he might get. He would go grab his treat holder or his rope or some other toy and prance (yes, I used the word prance, I’ve never really seen a dog do this before) into the room and lay the toy by one of us, nudge us with his nose, and if that didn’t work a bark or two would get us looking his way.

Reluctantly, one of the kids would grab the end of a rope and start to ‘play’ with the dog. I put the word ‘play’ in quotes because while they would do tug of war, throw the rope, and so on, they weren’t really engaged in the activity. Usually a phone or other electronic device was holding their attention and the dog and rope play was really just a perfunctory act. They wouldn’t look at the dog, be excited and really interact other than pulling on the rope and throwing it without any enthusiasm while looking at their phone. Finally, only a couple of throws into the ‘play’, the dog just left the rope on the floor, ambled over to the corner of the room behind a chair with his head and ears hung low. There, he laid down and let out a big sigh.

Ironically, as I write this article, he came over to play (see photo!). 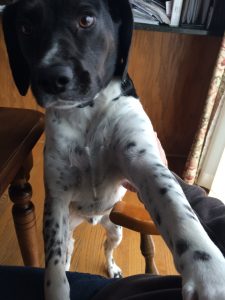 And yes, I took a break from the computer to play with him.

I think you all see where this is going. Being really engaged, really present, and really authentic makes all of the difference. My dog knew that my kids really didn’t want to play and so he just gave up. Similarly, as humans we can tell when someone is not being authentic with us as well, and we certainly read a lot about authentic relationships, leadership and such.
No surprise right.

But here is where some research may surprise you and certainly shocked the scientists who studied it.

Scientists at the School of Psychology at Cardiff University and the School of Humanities and Social Sciences at Jacobs University, Bremen, conducted two experiments on trustworthiness (Kumbhuber, Eva “Facial Dynamics as Indicators of Trustworthiness and Cooperative Behavior”, Emotion 2007, Vol. &, No. 4, 730-735). Participants in the study played a “Trust Game” where they were given a set amount of money. They could then choose to give this money to a counterpart who could get even more money and share it with the original participant or the counterpart could keep everything. Participants were told ahead of time that some of their counterparts were trustworthy and others were not. So if they choose an untrustworthy counterpart and shared their money, they could be left with nothing. Therefore, they could choose not to engage the counterpart at all and just keep their original amount. The only information the participants were given about their counterparts was a picture of them. Depending on the experimental condition, the participants saw one of three videos of their counterparts – one where their counterparts had a neutral facial expression, one with a true or real smile, and one with a fake smile.

Similar to my dog story earlier, participants were able to see differences between real or fake smiles and found those with real smiles more trustworthy and they were more likely to engage them in the experiment than those counterparts with fake smiles.
However, what they also found was that participants found those with a neutral expression to be least trustworthy, even compared to those with a fake smile who would be thought to potentially be the most likely to be duplicitous and deceitful.

In fact, the participants found those with a fake smile to be more likable, attractive, along with being trustworthy than the counterparts with neutral expressions. In the second experiment, they would also be more likely to meet the fake “smilers” in real life. It is true, that authentic smiles were the best in every category, but the fakers made out better than no expression at all even though participants could tell the difference between real and fake smiles.

What this means for us is even if you aren’t feeling it, sometimes even a fake smile is better than no smile at all and even a fake smile has a halo effect on a number of perceptions others have of you. And, oddly enough, faking a smile more often than not eventually translates into true positive feelings and the fake smile converts to a real one.   Manoush Zomorodi news anchor and author of Camera Ready, has an informative video about what she calls “The Benign Smile” which can help you move from a neutral face to one that is more engaging on its way to being authentic.

Finally, one caution and that is real vs. fake smiles don’t seem to have the same effect if you are communicating over the phone – check out the post “One Awesome Nonverbal Phone Tip” for more on this phenomenon.