The First Impression and Setup

There are research proven techniques to help maximize your first impression.  I will assume that the standard proper dress, grooming and research about the company/position have already been done or understood by you.  In this first section, I will focus on those subtle non-verbal actions that form a subconscious connection and increase your charisma.

Before the Interview – Power Pose

Amy Cuddy from Harvard University has done extensive research on the effects of High and Low Power posing and its psychological as well as physiological effects.

She found that if participants do a High Power Pose for a few minutes prior to interviews, that those candidates were found by assessors to be more confident, have greater presence and overall more likely to be hired versus those who did Low Power posing.  Subsequent research on this showed that those who High Power posed actually increased their level of Testosterone (a confidence building hormone) and lowered their Cortisol (a stress hormone).  High Power posers also felt more confident and took 86% more risks compared to Low Power posers when they were asked to gamble after holding these poses. 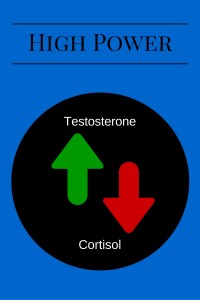 The graphic illustrates the difference between Low and High power poses.  Prior to your interview, e.g., in the bathroom, practice 2 to 5 minutes of High Power posing to relieve stress by lowering Cortisol and amp up your confidence

Turns out evolution has wired us to immediately check out others to see if they are friend or foe.  This helped in caveman times to see if others wished to do you harm.  Subconsciously, our minds check two things immediately – hands and face/smile.

The smile is the one expression that can be seen and recognized from 300 feet away.  True smiles are in the eyes, and create wrinkles or crows feet versus a fake smile which is easily recognizable.  They are hard to fake but if you want to practice put a pencil between your teeth and bite down.  The cheek muscles naturally rise similar to a real smile; notice how this feels and remember to smile this way when you enter (just forget the pencil).

Hands are also key because our subconscious looks to see what we have in them (back to cavemen who were looking for weapons or something being held in the hands that could do us harm).  So keep your hands open and inviting.  That is, no tight fists.  Keep them relaxed.  Once you sit down make sure they remain visible keeping them above a table and not underneath.  Studies with jurors found that they believed defendants who kept their hands under the table to be more untrustworthy and were subsequently more likely to find them guilty.

Three keys before you even speak are the Handshake, the Nod, and Eye Contact.

Haptics is the fancy word for touch, but it is key in forging and maintaining relationships.  When we have skin to skin contact through touch, the brain releases Oxytocin, the “connection”, “cuddle”, or “love” hormone.  Research shows that a good hand shake can create the same bound relative to Oxytocin as a 3 hour face to face meeting. The keys to a good handshake?

1. Firmness – not too firm, not to limp.  Impossible to describe so grab some friends who will be honest with you and test your handshake firmness with them.

2. Vertical – Keep the handshake up and down.  Don’t turn your wrist over the top of the person you are shaking hands with and don’t let them turn your wrist under.  This is a dominance move and you want a level playing field to start the relationship.

3. Dry – No sweaty palms.  When you are doing that power pose in the bathroom, dry those hands off.

There is some interesting research showing that those who give a slight/subtle nod appear more credible.  In the 1960 presidential debate, those who watched it believed Kennedy won the debate while those who listened thought Nixon won.  The video below starts at the place where Nixon and Kennedy give nods to the audience.  Watch and see the difference and have your nod be more subtle and confident like Kennedy’s.

Similar to touch, Research reported in Biological Psychiatry suggests that Oxytocin’s release causes prolonged eye contact.  But the opposite may also be true; in The Oxytocin Factor, Dr. Kerstin Uväs-Moberg, believes that eye contact can bring about oxytocin release as well.  This may be why appropriate eye-contact puts at ease with other people.  Make good c
ontact while shaking hands and using the Nod.

If you employ the High Power pose prior to your interview, instill trust subconsciously through your hands and smile, have an appropriate handshake with a Nod and good eye contact, you will maximize your first impression and in so doing put yourself in a strong position when interviewing.

The Right Words at the Right Time

Identical twins interview for a job.

They wear the same clothes.

They say exactly the same words.

They interview with the same people.

They match their mannerisms to be as much the same as possible.

But one of the twins gets offered the job 80% of the time over the other twin.

It may seem odd, but word order makes all the difference.

Starting positively sets the tone. It is the anchor all subsequent comments are judged from and what we know from brain research, once an anchor is formed, it is extremely hard to move away from it.

Bernieri et. al. found that whether it be 20 seconds or 20 minutes, those who watched videos of  interview candidates came to the same conclusion on who they would hire.

So a successful interview starts way before you walk through the door with no only preparation but all the nonverbal queues you send before those first words come out of your mouth.

When you do speak, make sure to set a positive tone.

Putting these together will result in differentiating you from your competition.